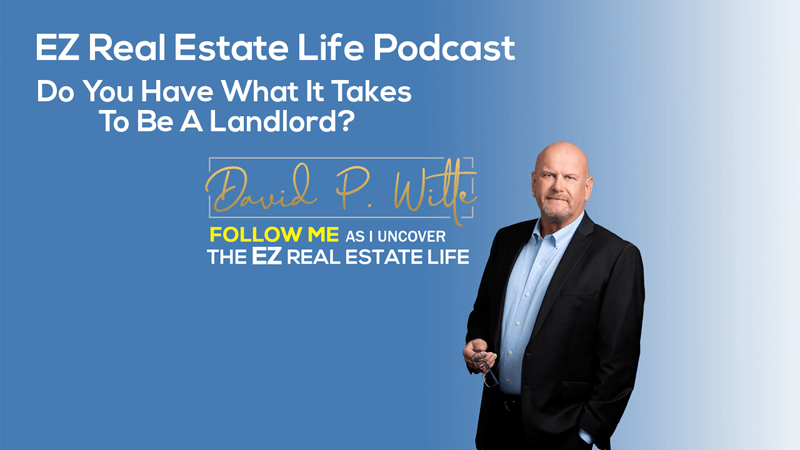 Do You Have What It Takes To Be A Landlord?

Today I want to talk to you a little bit about what it takes to become a landlord.
I know that a lot of you are looking to become a real estate investor. Whether it’s a wholesaler, flipper, or rehabber, eventually you’ll turn your thoughts to building long term wealth as a landlord . I think that I should talk about that because there’s some things you’re going to have to go through inside yourself to become a good landlord, and it’s not always easy to do this.

In popular culture, landlords have a stigma about them. There’s kind of a stereotypical evil landlord idea out there that’s really not true. It’s not that landlords are evil people, it’s just they’re a product of what they have to deal with on a daily basis. If you don’t learn to deal with these things, you’ll wind up being one of those people that has horror stories about renters, and never own rental property again. And you tell everybody else never to do it because it’s the worst thing in the world. That’s the belief you’re going to be left with. You’ll hate it when really, it’s a great way to build wealth.

Not the best first step

When starting out in a real estate investing, I don’t recommend you start as a landlord. There’s a lot of things you need to learn about real estate itself, like how to do a deal, how to fix things, getting a team together. There’s a lot that goes into being a real estate investor. I normally recommend that you start out on a different plane. I recommend you start out as a wholesaler or a flipper and move your way into being a landlord by either doing a master lease or sandwich leasing arrangement with someone that wants to get out of being a landlord, or partner with another investor to pick up part the profits for managing the deal.

Once you get started as a landlord, there’s some internal issues you’ll need to deal with. Most of them are things that are just part and parcel of being a good human being.

The desire to be liked.
It’s one of those things you got to get over. Some people aren’t going to like you. If you want to be liked all the time it’s going to be tough because the first time one of your renters gets mad at you, you’re going to feel like you’ve got a big hole shot in your stomach.

The desire to help everyone.
That was one of my big things. I like to help people, but once I became a landlord, wanting to help people started costing me money. It can cost you a lot of money and you get you in a lot of trouble.

Believing everything that people say.
You’re going to want to believe your tenants. You’re going to want to think that they’re telling me the truth, and that may not be the case. Matter of fact, if it’s involving money, it’s usually not the case. I just had someone this past week try and take a water hose off a hose bib. They took a wrench and snapped the entire hose bib off the end of the pipe and tried to say it was my fault because the hose bill was not properly secured. We both knew it was a lie. I can’t walk around behind them making sure they don’t do stupid stuff, but when a tenant does stupid stuff, they’ve got to pay for it. But they’ll try and get you to pay for it saying it’s your fault.

Being in a rush to get your next tenant.
You’ll have to stop being in a rush for everything. I know that the next payment is coming due, but as a landlord, you’ve got to take it slow. You’re starting a relationship with someone that you’re going to have for a year or two or three or 20, you don’t know. You need to start that relationship knowing who they are, what they’re doing, what they’re all about. The worst thing you can do is to fall prey to something we in the business call the “bum rush”. That’s when somebody comes up and hands you an application says, “I’ve got the money right here. I’ve got cash. I can pay you first and last and security right now. Let’s go. I’ve got to have a place, I got kicked out. Yesterday, now we’re living in a hotel.”
That’s bad news. That’s the one you tear up and throw away. If they don’t have a place to live, they’re not people that thinking ahead. They’re reactionary people and they’re going to be problems for you down the road.
That’s some of the internal stuff you’ve got to deal with.

Then on the external side, there are forces that are going to be pressing on you.

Tenants will try to train you
You’re going to have to get accustomed to tenants trying to train you. Tenants love to try and train the landlord to do what they want them to do. If you’re new and you don’t have any training ingrained in you as to how you do things and how things are supposed to be done, they can train you pretty easy. And it almost always turns out bad. That’s the deals you hear landlord horror stories about. People that let their tenants train them and it goes bad quickly. Little things like, my car broke down so I’m short on the rent. I can get it to you next week or two weeks from now. Or, my parrot had puppies and I had to pay the vet bill, and don’t have the money to pay you.
You should know by now that the first and foremost thing that people should be paying is for their place to live. If they’re not willing to pay for their place to live, they’ve got a problem in their head and it’s not your problem. Sure, bad things happen to good people. But they also have to deal with their own problems. You have a business to run, don’t allow them to make their personal problems become part of your business problems. You got to keep them separate.

Tenants that run late with the rent
Don’t have your tenants run late with the rent. It’s the first, rent’s due. If you don’t have the money in your hand, you need to find out why. You’ve got to go see them or pick up the phone and call them. I recommend going and seeing them. If it’s the second day of the month, and I don’t have my rent that’s due on the first, they get what’s called a three-day notice, which is a notice to pay and it gives them three days to pay or I start an eviction. (Eviction timelines vary by state. Look up your state landlord-tenant laws and commit them to memory before you even consider renting a property.)
So, if they say, I’ve got half the money right now, then get half the money from them. Then hand them a three-day notice for what’s left owing. Normally, if they have exactly half the rent, I’ll date the three-day notice for the 15th.  If they need to pay half the rent and pay the rest of it on the 15th that’s fine. But, if they say I’ve got a hundred dollars, I take the hundred dollars and then just change the amount on the three day notice, hand it to them and say, “Okay, you got three days to get the rest of it to me. If you come up with another a hundred dollars, come see me. We can do it however you need to do it and get you over this hump.”

Lender pressure
As a landlord you’ve got to be serious about your money, because that will make you or break you as a landlord. Your cash flow is King, especially if you’ve got a mortgage. That’s one of the reasons I don’t like to see new investors jump right into buying a rental because they don’t have any cash. They get a mortgage on a property and crank it out just as long as they can and get as much of a mortgage as they can. They’ve got no equity and they’ve got huge payments on the place. It’s much better off to get yourself some money and some experience as a flipper or wholesaler. That is unless you’ve got a great job. If you’re making $200,000 a year and you need some tax write offs, then having the depreciation on that piece of real estate can really help your tax burden.

Stress of property repair management
Another thing is property repairs. You’re going to have to constantly deal with property repairs as part of the management. You’ve got to find a good team that can take care of stuff for you. A lot of people say, “I’ll get a property manager, he’ll handle it.” That works if you got a lot of properties. If you’ve got 10 properties and you’ve got really great cash-flow on all of them, and you can afford to lose 15% plus of your rents, then you can hire a property manager. The problem with the property manager is they don’t want to deal with your tenants either. So, they’re going to drop everything and call someone to go fix the problem, and they don’t care how expensive it is. Also, a property manager will tell you that they don’t up-charge on the repairs, and they don’t. But what they don’t tell you is they’ll get a discount on the bill and they keep that discount. So it’s just one of those little things you got to learn about, being in the rental business.

I just wanted you to realize and be prepared for some of the internal  and external obstacles that you’re going to have to deal with and  overcome to have a happy and successful career as a landlord.

I’m putting together some longer videos on this. I’ll probably call EZ Land-lording, and deep dive into what you need to create a portfolio that won’t drive you crazy. If you sign up for my free weekly training below, I’ll notify you when it’s available.