Building Your Real Estate Freedom Portfolio From Scratch
Do You Have What It Takes To Be A Landlord? 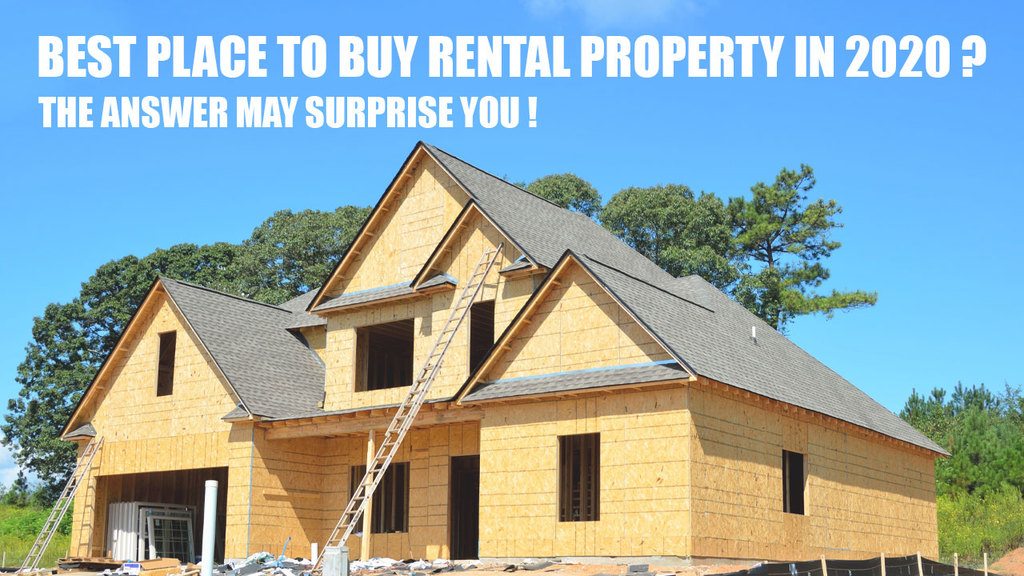 Just like every year in the past, the best places to buy rental property in 2020 depends what you expect as a return on your investment and how much risk you are willing to take.

This is not going to be your usual “Best places to buy rental property in 2020” article, because those articles cannot consider your unique situation and preferences.

Right now, you may be saying “What the crap?”

I promise that if you give this article a read, I’ll help you find where to get the best rental returns with the least stress and risk.

Let me share a story with you to help you understand where I’m going with this (The names have been changed to protect the idiots…woops I meant innocent, or something like that).

John is a real estate investor in Sarasota, FL. He has a fantastic job and wants to invest some of his extra income. John has watched the real estate market rise since its low after the crash of 2008 but was hesitant to buy. Watching several of his friends and family members take severe financial hits in 2008, he wanted to avoid that.

He had heard in the news that rental rates were at an all-time high, and that property owners were raking in the cash. It was extremely exciting.

John started watching Zillow and Realtor.com for deals. He called agents and asked for help finding a good rental property. John looked at a lot of properties and studied what properties were renting for. He soon concluded that the market was saturated and overpriced! Where were all the good deals that he read about? Where were the $60,000 houses that rented for $1200 per month? He asked his realtor contacts about this, she said that those deals all went away several years ago, and the best he could hope for now was an 8% return.

John was more than a little shocked by their math. He had taken enough business courses in college to know that there was no way this equated to an 8% return. What about taxes, vacancies, and repairs? The agents told him that these were a normal cost of doing business, and that he would have to do his best to mitigate their effects.

A little disillusioned about the “pretty house” market, John started looking into workforce housing, properties in the lower 1/3 of the market. He did find that the numbers were a little better, and that he could get a 1% gross return on his purchase price per month, but that was the best he could find. $100,000 would bring in about $950 - $1,000 per month.

He asked one of his agents about this and the response was, “That’s how the price of rentals is set, it’s the 1% rule. You take what it should rent for and multiply by 100 to get your asking price. In a good market you can sell anything using the 1% rule.”

It seemed to John that the great return numbers he had heard about were all from people that had bought in 2012-2015 and were now reaping the rewards of the market escalation.

He had missed it. The market had passed him by. What would he do now? Should he buy in now when the prices are high, and risk losing money on the downturn? Should he wait for the next correction and be ready this time?

John struggled with this for a couple of weeks and discussed it with his friends. One day a friend of his said he had heard that prices on houses were cheap in the Midwest. They were practically giving them away. People were buying houses up there for under $30,000 and renting them out for $500-$600 per month.

He at once started making calls to agents in Detroit, Chicago, and Pittsburg. It took a few calls, but he finally found some areas where the homes were at “bargain-basement” prices. After setting up some showings, John took a couple of vacation days off and booked a flight to the Midwest to start his quest.

He arrived in Detroit early in the morning, picked up a rental car and drove to the agent’s office for the first appointment. When he met his agent, the conversation wasn’t what he expected.

“Are you sure you want to invest in this area? It’s really depressed. There are lots of abandoned houses, and most tenants avoid this area if they can qualify for a rental somewhere else. The city has been considering taking the whole place over and bulldozing the homes.”

This was NOT what John wanted to hear. He had made the trip, so he pressed her to show him the properties. She was right, it looked like a war zone. Lots of boarded up homes and derelict cars. Tall grass and trash covered most of the yards.

As they drove, he asked the agent if there had been a big influx of investors buying houses. Her answer didn’t make him feel much better.

“Yes, we have had a lot of investors come to town, and some of them bought. What really got it started was a few “investors” came in and bought a lot of the properties and resold them with their own firm doing the management. A lot of people jump into buying “turn-key” investments, based on estimated numbers. Some of them do ok, but the vacancy and turnover rates usually kill any real profits. The only people making money are the management company and the repair people. Most of the investors are dumping them and leaving.”

An All Too Common Story.

The story that I just told you is one that I’ve heard far too many times.

It’s too high here, let’s go over there! The grass is always greener on the other side.

“I won an award for owning investment property in 10 states. It was the worst thing I ever did. I should have saved my money and just bought the wall plaque for myself. My advice is to buy properties that you can drive by.”

I totally agree with John Schaub. If you don’t know the intricacies of your local market, how can you hope to know one that is thousands of miles away.

Florida has a long history of con men selling swamp land to unsuspecting northerners. Why shouldn’t we expect other places to be the same.

I want to share with you some of the immutable laws of real estate investing.

I do understand the problem you are facing, as I’ve helped a lot of investors in the past find good deals. The primary issue is that the only deals that your agents are bringing you, and the ones that you are finding yourself are retail deals.

These deals are on the market in the hope of making a profit. It is almost impossible to get a great deal from someone that has no urgency to sell. There are still profitable deals in a hot market, you just need patience and a little training. With a little networking to find a real estate wholesaler, and some digging on your own, you will be able to find below-market deals in any area. People get tired, get lazy, or panic, and want to sell their home fast.

Here are a few reasons that people have sold me property below market in the past.

Take Back the Reins.

To make your market one of the best places to buy rental property in 2020, you will need to stop relying on an agent and take personal responsibility for your success. A lot of real estate agents have ZERO ability when it comes to marketing for and finding killer deals.

If they were to find a seller that was willing to take a discounted price, law limits them to certain fiduciary duties. If a seller asks them, “What’s my house worth, and what can you get me for it?”, your great deal just went out the window. For them to mislead a seller so that you can get a great deal runs counter to what they are taught (and I know, I’m a FL State Licensed Real Estate Teacher).

A real estate agent obtains the highest price possible for their seller (unless instructed otherwise), and the “best” possible price for their buyer. Training to be your “bird dog” and find low priced sellers is not part of their curriculum. Their fiduciary duty to the seller over-rides any desire to help you once they sign a listing.

Also, since they get paid a commission on the sale, there isn’t a lot of incentive to lower the price. Getting you to pay more protects their fiduciary responsibility to the seller and protects the commission.

Let’s look at this formula. It will help.

But I Use a Buyer’s Agent!

You may be saying, “I’m different, I use a buyer’s agent. They represent me!” That works in some instances, at least for a little while before reality sets in on them, and you.

While there are a lot of good buyer’s agents out there, be prepared to kiss a lot of frogs. When a brand-new fledgling agent starts their career, Investor Buyer’s Agent is one of the first things they want to do. It seems like easy money to them.  It’s safe, because at first there is no rejection. Every investor they talk to says, “Sure, find me a deal.”

It does not take long for them to realize that

If you do find a great buyer’s agent, make sure you treat them well and be loyal to them. Another one may be hard to find.

How to Overcome the Problem

I’ll give you a list of easy things you can do to find better deals in every market.

In the book, “Acres of Diamonds” the writer conveys the story of an African farmer who desperately wanted to be rich. After hearing stories of others discovering diamond mines and becoming millionaires, he sold his farm and went off to scour the African continent for diamonds.

He spent the rest of his life wandering the African continent searching unsuccessfully. Finally, worn out and in the throes of depression, he threw himself into a river and drowned.

The man who had bought his farm happened to be crossing the small stream on the property one day, when he saw an unusual stone in the water. He brought it home and put it on his fireplace mantel and forgot about it.

In hopes of finding his fortune, the first farmer sold what turned out to be one of the most productive diamond mines on the entire African continent. He had owned acres of diamonds but sold them so that he could go and seek his fortune.

The moral of the story is clear.

Focus on finding the opportunity in your own back yard before looking elsewhere. If you take the time to learn how to find motivated sellers and good deals, you may find that you do not want to leave.

To learn more about real estate investing, sign up for my free weekly email training in the form below.