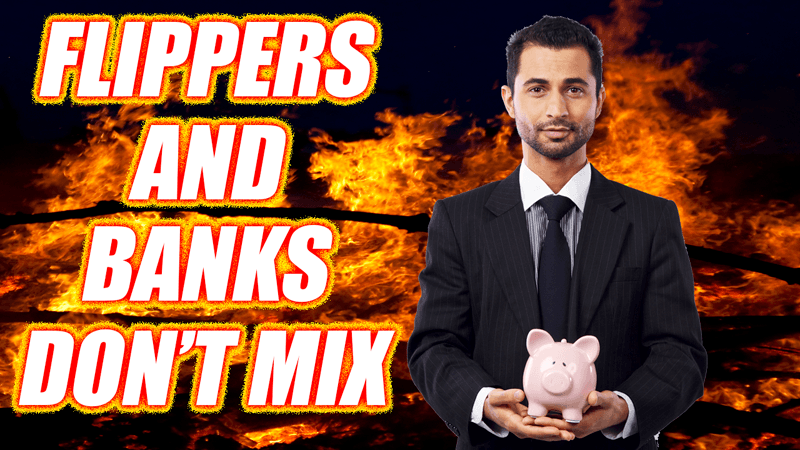 Today, my topic is why banks are the devil.
That’s the joke from Waterboy, where the mom says, “foosball is the devil.”
Well, banks aren’t the devil, but if you get on the wrong side of them, you’ll think they are. As real estate investor, you need to learn to stay away from banks. I do not have any loans in place on any properties with a bank. A lot of the guys I know do not either. I know Pete Fortunato said he’s never had a loan with a bank.

Banks Are Slow
The reason you don’t want to deal with banks is because for one, banks are slow. Someone once said, “you can’t steal in slow motion.” If you’re doing a really good deal on a piece of real estate, it’s not going to sit around for 30 or 45 days waiting for your bank to get their ducks in a row. You’re going to have to get that thing closed and get closed now.

A Friend with Cash
The only way you’re going to be able to do that if you don’t have a large pool of cash is to find either a hard money lender or an investor that you can partner up with. Or someone that’s got a self-directed IRA or just a regular 401k that they can borrow money from for short period of time. Now I know that these people don’t grow on trees. You’ve got to go out and actually find them and you’ve got to build a relationship with them.

Hard Money Lender
Not so much relationship building with the hard money lender, because they’re all about the money. They don’t care what your credit rating is, they don’t care what you’ve got. All they’re looking at is the piece of property and if you fall down, do they want it. That’s all they care about. That they can get it with a low enough overhead that they can pick it up and make a killer deal out of it if for some reason you fail.

Banks Will Eat You
Now a bank is looking for the same thing, only on a different level. If you fall down, they want to take everything you have. They’re not just attaching that one thing. They say the devil’s in the details. Most of time people don’t realize every time you sign a mortgage at a bank, they attach everything that you own, every other piece of property. And if you’ve got twenty or thirty pieces of property that can get expensive really fast. They can make you start auctioning off property in a down market to cover your debt.

Work It Out
When you’re dealing with an investor or a hard money lender, you can actually call them up and talk to them, work it out. Say look, can we tack some of this on to the end? You can come up with a reasonable plan that works great for them, works great for you, and you both come out smelling good in the end, even if it takes a year or two to make it happen.

12% Interest…AAAAHHHH!!!!
Now a lot of you will say, “I can’t afford that kind of interest. I want to go to a bank where I can get 5% interest.” Well, the problem with being an investor trying to do 5% interest is you’re going to run out the ability to get loans. After you’ve had so many loans, seven or eight loans, they’re going to start getting nervous about you. But the investors will keep going with you. They don’t care how many loans you’ve got outstanding, as long as that property is good property, and they know it will work for them. That’s all they care about.
You know that a hard money lender is going to charge you 12% interest.  I know, that sounds like a lot, and if you’re trying to do a rental property with them, it’s too much. You can’t do it.  Find an investor and get it down into the 9% range, or 8%, and that’s a good long-term play for someone’s IRA, and you can actually make money at it.

There’s no reason you can’t find some other investors that don’t want to work, or are bad at management. They’ve got money and just want to get a good return.  Work with them. Make some creative deals with them and you’re both going to win in the end.